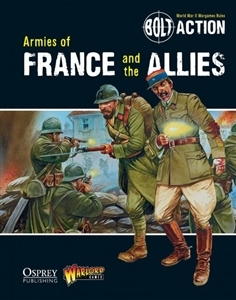 Armies of France and the Allies Codex

*** This is the supplement to the Bolt Action Core Rule Book ***

World War II was truly a ‘world’ war, and many nations joined the fight against Germany and the Axis. This latest supplement for Bolt Action covers the armies of France, Poland, Czechoslovakia, Greece, Denmark, Norway, Holland and Belgium that stood against the German Blitzkrieg, as well as the resistance forces that sprung up in the aftermath of occupation.
Contents


Written by Warlord Games, a copy of the Bolt Action rulebook is needed to use this supplement.